Doctors upgraded the Rev. Jerry Falwell's condition from critical to stable on Wednesday and removed the Moral Majority founder from a ventilator.

Falwell, 71, has fluid in his lungs and doctors say he suffers from congestive heart failure, although a cardiologist, Dr. Carl Moore, said testing showed "his heart is strong" and he had not suffered a heart attack.

Ron Godwin, Falwell's executive assistant, had said Tuesday that Falwell had suffered a recurrence of the viral pneumonia he had suffered from weeks earlier. But doctors said Wednesday he did not have pneumonia.

Falwell, who was admitted late Monday, heard from President Bush, who wished him well, a spokesman for Lynchburg General Hospital said at a news briefing. Details of the phone call were not released.

Uh oh. Of course Mr. Bush phoned him. This is the same dimwitted, hypocritical twat who accused Tinky Winky of being gay (what was he doing watching that show anyway?), and who blamed September 11th on queers, women and liberals. We hope you recover, you sick fuck, but only so that you might relapse again so that you suffer for a while longer before you go. May you rot in hell.

Crooking for Kids and Cowboys?

I've got a penthouse apartment in New York and a $30 million mansion in Westport. Why would I go someplace that I can't breathe?

Don Imus, the decrepit radio shock-jock, following a Wall Street Journal article by Robert Frank about an investigation by Eliot Spitzer into the Imus Ranch -- a lavish ranch where kids with cancer are offered an opportunity to be vegan "cowboys" (at a cost of almost $3000 a night). Uh...why did you build it in a place you can't breathe? (He semmed to have little difficulty spewing hot air from said location). For more detail on the Don and Deirdre Imus ranch scandal, read Imus and the Flies on Annoy.com.

The United States' unanimous defense of life is impressive; it's a stop to euthanasia from one of the most advanced, modern and wealthy countries. That should make us think.

Italy's European Affairs minister, Rocco Buttiglione, applauding U.S. leaders' actions in intervening in the case of Terri Schiavo. From one of the few countries who went into Iraq with a "bomb now, check the facts later" policy, it is nothing if not amusing. What would Mussolini have thought?

The legal issues, I grant everyone, are complicated, but the moral ones are not. What will it hurt to have a federal judge take a fresh look at all this evidence and apply it against 15 years’ worth of advances in medical technology? We have a bill – the Palm Sunday compromise – that will give her that chance. It is bipartisan and bicameral and has overwhelming support in both houses. It will eventually pass. We just hope the objectors let us vote on it before it’s too late.

This coming from Tom Delay, of all people, following an unusual attempt by Congress to intervene in the case of Terri Schiavo, who suffered brain damage in 1990 when her heart stopped briefly from a chemical imbalance believed to have been brought on by an eating disorder. Court-appointed doctors say she is in a persistent vegetative state with no hope of recovery, and her husband Michael has fought to remove the tube, allowing her to die and not live in this condition, as she purportedly expressed to him. Take your Palm Sunday compromise and shove it up your corrupt ass, you hypocritical pig. Funny how none of these so-called Terri supporters are willing to give up eating and rely on a feeding tube for the rest of their lives.

"As a matter of fact, I’ve only been married for 25 years and I’m going on my honeymoon a week from today. Coming back from that honeymoon we’ll stop in at the cable convention and talk to them," said Ted Stevens, Chairman of the US Senate Committee on Commerce, Science & Transportation on March 11th in response to a question as to whether he was still considering expanding the Broadcast Decency bill to include cable.

If only I had been told first, damn it! I could have prevented sordid, lascivious remarks from cluttering my mind and email box.

Given the current laws and current cultural and political climate, the vulgar remarks Senator Stevens makes above clearly violate the most basic standards of decency. In light of the fact that Senator Stevens refers to his marriage of twenty five years, one can only assume that he is heterosexual, since only Massachusetts permits gay marriage, and only since recently. Heterosexuality, by definition, relates to, or is characterized by a tendency to direct sexual desire toward individuals of the opposite sex. Usually this lewd tendency is actualized by inserting an erect penis into a moist vagina. Honeymoons, typically, (and especially in an age of abstinence before marriage), are suggestive of the consummation of the marriage in which sex, which could also include anal and oral sex as well as foreplay where sticking all sorts of appendages into all sorts of orifices, is high if not top of the agenda.

Did Chairman Stevens honestly feel it was relevant or appropriate to inform an unsuspecting public, via a prurient government-issue press-release, that he'll tackle cable decency only after he's fucked his wife?

"Nick Carter deeply regrets the current situation. He is on doctor prescribed medication and was unaware of its interaction possibilities."

Carter publicist Juliette Harris in a statement Monday following the drunk driving arrest of the 25 year old member of quintessential boy band, Backstreet Boys. I mean give me a fucking break. Someone should make Carter and this amateur hour bitch, Juliette Harris, tour a cemetery or two and visit a family or two who have lost loved ones to drunk assholes on the road. Had the guy said, "You know what, I fucked up and I'm really sorry," it would have been slightly better than this lame-assed, take-no-responsibility-it-was-the-Vicodin kind of crap excuse. If this is what one pays a publicist for, consider giving the money Mothers Against drunk Driving (MADD) instead. 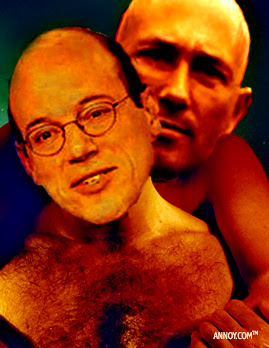 When Jeff Gannon tossed President Bush a softball question that made even NBC’s Tim Russert look hard-hitting, he essentially outed himself as a fake news reporter writing for Talon News, a publication that primarily added frills to press releases (as if no others publications do that), the world learnt who James Guckert really was. A hysterical clamor of left wing bloggers revealed Mr. Gannon was also a low priced call-boy, offering his shaved balls for a mere $250 an hour or “weekend specials.” No doubt Talon News paid less. Not only had Gannon been lobbing softies to the Prez and Scott McClellan under his assumed name, but to Ari Fleischer before him. Who was getting soft and who was getting hard from all of this remains an open-ended question, and even though Gannon’s moonlighting has barely any relevance to his job as a journalist, to position himself a top on sites like www.hotmilitarystud.com, whilst posing with his ass cheeks spread wide apart is simply inexcusable. Ari Fleischer’s book “Taking Heat” simply corroborates that there’s always only been one top at the White House, and her name is Karen Hughes.

I think there's a lot of incredibly important lessons to be learned in that report. . . . We learned lessons at NBC more than a decade ago when we had an issue with 'Dateline.' And we instituted an enormous number of safeguards that would never have allowed something like this to happen...Nothing like that could have gotten through at any level because of the safeguards that we instituted more than a decade ago.

NBC Universal president, Jeff Zucker, during the Television Critics Association press talk in January, brazenly trashing CBS for the Dan Rather scandal related to President Bush's mysterious National Guard service. A holier-than-fuck attitude is not such a good idea though, when words can come back to haunt. Consider this Brian Williams exclusive on March 1, 2005.

There is word from Baghdad this evening -- confirmed by NBC News -- that the presiding judge in the trial of Saddam Hussein has been assassinated.

Except that he hadn't been. Turns out it was another judge. As Jon Stewart of the Daily Show pointed out, images of the judge who was not assasinated, had been deliberately blurred by all television news broadcasts to protect his identity. However, NBC, thinking he was dead, didn't bother to blur his image. Out damn spot!!!On March 2, 2005, Williams had to back-pedal:

Last night here on this broadcast we had news of a judge's murder.Â At that time U.S. sources believed the victim was the presiding judge in the Saddam case. We later learned and reported it was, in fact, a member of the Saddam tribunal

Brian Stelter of TVNewser has all the gory details, which include Zucker references to a copycat acts by Fox. Referring to Fox's copycat tactics at the Television Critics Association, at least Zucker got one thing right. And Scott Pierce of Deseret Morning News predicted this would happen as early as February 10th in his NBC exec should never say 'never' about scandal ! An obvious prediction, yes, but no one else did it.

Pussies and Faggots at MSNBC

I know that these Susan Sarandon types at the ACLU are going to complain like the pussies and faggots they are.

Rob Bartlett, a fat wiseass "comedian," on MSNBC’s Imus in the Morning this morning, pretending to be Attorney General Gonzales. While there’s room for political incorrectness and humor, to call people pussies and faggots at 7.30 am on a supposed “news” channel is ridiculous. Does Don Imus refer to his wife Deirdre as a pussy to his son Wyatt? Is Carol McGuirk, executive producer Bernard McGuirk’s wife a pussy or a mother to her children? Is Suzanne Wright, Chairman and Chief Executive Officer, NBC Universal, Bob Wright’s wife a pussy? Is Caryn Zucker, married to Jeff Zucker, President of NBC Universal Television Group a mother or a pussy to her three children or is Susan Falco, wife of Randy Falco, President of NBC Universal Television Networks Group a pussy or mother to their three children?

Bill Gates recently decried the current state of education in America. How about focusing on the state of journalism? Or do these executives think it’s appropriate for kids who watch the news with their parents in the morning to hear "news personalities" refer to women and men fighting for civil liberties as pussies and faggots?