The 43rd President today acted like the press on the tarmac knew how small his dick is. Georgie read a 45-second very prepared speech about Libby’s label, label, label. Then he ran away from reporters yelling; “Mr. President is this an embarrassment for you?”

The almost in tears pussy-boy hurriedly boarded the good ship lollipop followed by his Nanny (Harriet Miers) who was holding what appeared to be a triple ripple remote control butt plug with the presidential seal on it.

Mr. Cheney was swamped with emergency calls to his brokers (Exxon, BP, and Chevron) so he could only issue a brief statement via one of his Zombies about the incitement, not quite the expected reaction from Caesar’s wife who is supposed to be above suspicion. 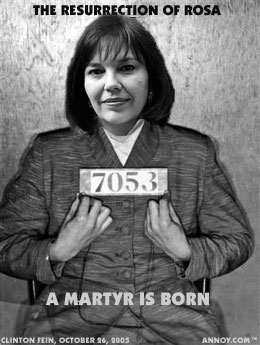 Given the downward spiral of women’s rights in the new Iraq, (and Laura’s long-forgotten commitment to women in Afghanistan), all that’s needed to complete this branding of American feminism is the introduction of a sexless, frigid, religious virgin to mandate morality whilst sipping from Diet Coke cans with Clarence Thomas.

Enter Harriet Meirs – the most unqualified sycophant ever! The woman George W. Bush has nominated to replace Sandra Day O’Conner on the Supreme Court is a shallow, forgetful, inconsistent brownnose who believes the control of women’s bodies ought to be shaped by men with delusions of piety, and in imaginary, sandal-clad martyrs watching protectively from the heavens.

Not since Mr. Bush himself was appointed to the Presidency has a nominee been so extraordinarily unqualified to hold a position. When Monica sucked President Clinton’s cock she ended up with a soiled dress and a lousy job at the Pentagon. Harriet Meirs kissed George W. Bush’s ass and was offered a lifetime appointment to the Supreme Court.

In a straight-faced article in the New York Times about Secretary of Defense, Donald Rumsfeld's, trip to China, Thom Shanker wrote the following incredulous eye-opener:

He said other nations had a right to question whether the Chinese government was forthright about its spending on troops and arms, and the motivation for its growing arsenal.

He questioned why China and Russia had joined diplomatic forces to try to prompt Central Asian states, especially Uzbekistan and Kyrgyzstan, to evict United States and allied forces from bases on their soil.

For someone who referred to allies Germany and France as "Old Europe," it seems like Rummy is reminiscing for an "old war," namely a Cold War. Or is hoping to provide job security for former nemesis, Condoleezza Rice. Perhaps he would understand it better if the Chinese lied about their expenditures under oath like Rumsfeld does.

Or perhaps senility has caused him to forget the blueprint America provided for defending one's nation, namely unilateral, preemptive force.

Of course if he wanted real transparency from foreign nations, he could once again try to set up a manipulative Office of Strategic Influence, so that lies and deception can be filtered from one nation to another using the same methodology.

Isn't it time this old, rotten stinking dinosaur evolved? Clearly, in this instance, there is no such thing as intelligent design. But there should be intelligent resign. Get rid of it already.

A Pitbull in a China Chop

Those of us in the United States and in other countries around the world, free countries, hope that the choices they make are choices toward a more open society, a more transparent society.

Brace yourself. That was Defense Secretary, Donald Rumsfeld, oh his first official trip to Beijing as Bush's Defense Secretary, warning that China must deal with "evident tensions between its desires for sustained economic growth and restrictions imposed by the communist government that limit openness and the free-flow of information."

This coming from the incompetent, incontinent fuck fart who proposed the Pentagon’s “Office of Strategic Influence” created shortly after September 11 to publicize the U.S. government’s “perspective” in Islamic countries and to generate support for the U.S.’s “war on terror,” by deliberately lying to and misleading journalists. (In retrospect, one has to wonder why they needed a “special office” when stooges like Scott McClellan, and whores like Maggie Gallagher, Armstrong Williams, Jeff Gannon etc. were doing the filthy work for them.) Not to mention Judith Miller!

Since the pot had decided to call the kettle black in the transparency department, it’s strange that Mr. Rumsfeld chose not to raise Chinese torture methods on his trip to China. After all, dripping water on hooded prisoners with electric wires attached to them is simply torturous!