If News Corp. Did It 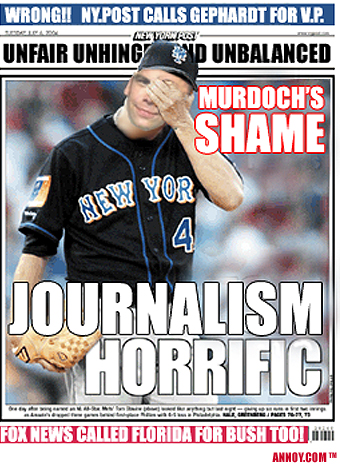 Amidst the cries of censorship and the frenzy surrounding the OJ Simpson/Judith Regan/Fox News saga, people seem to be confusing censorship with public backlash.

Despite a long-winded screed defending her decision to publish O.J. Simpson’s hypothetical confessional, If I Did It, Judith Regan’s attempt to garner sympathy appears to have come from the Linda Tripp School of Redemption. In fact she almost sounded like Linda Tripp in her infamous, “I am you” speech, claiming that she did it for all the women who had been abused, herself, front and center.

News Corp. the Rupert Murdoch owned media empire that owns both ReganBooks’ parent, Harper Collins as well as Fox News, and who stood to benefit by this grisly cross-promotional cheap-shot grossly miscalculated how swift and ferocious the backlash would be.

Even I, on Annoy.com, took News Corp. to task, but not with the kind of hypocrisy that the holier-than-thous at MSNBC and CNN et al. saw fit to cover the story. Taking a graphic image of Nicole Brown Simpson lying in a pool of blood, her slashed throat covered by a promo of O.J. s new book and the News Corp. logo and tag line, mocking Judith Regan’s claim of domestic abuse solidarity and whitening her skin in much the same way Time magazine had once made O.J.’s darker, the piece was titled, using the same font as the book, If We Had Ethics. The irony is that I am posing the question as much to myself as I’m applying it to News Corp. After all, we are exploiting a tragedy in almost the identical, gratuitous way. The main difference though, is that ours is a commentary, and we aren’t making any money from it.

The ferocious response from the outraged public, as advertisers warned of pulling ads amidst rumors of consumer boycotts, as Fox affiliates jumped ship, refusing to air the interviews, and bookstores refused to sell the book, News Corp. bailed. Not because of a sudden pang of conscience and instantaneous recognition of the bad taste they were exhibiting, but because in totality, the endeavor was doomed to cost them, not make them, money.

If anyone thinks Rupert Murdoch’s statement was about a sudden cathartic recognition that the toilet paper garbage he produces globally is too damaging and unfair, wake up and smell the ink. His was the business equivalent of President Bush realizing in 2004 that Iraq was a mistake and pulling out. That’s why Rupert Murdoch will be around longer than President Bush.

No matter what, this was not censorship. There was no government involvement in this whatsoever, and truthfully, News Corp. has the right to say and publish what they want.
The market, however, can also tell a corporation where to get off, and they sure as hell did.
But don’t be fooled into thinking the Diana-chasing is over. Not by a long shot.

I think he’s gotten a real sense of the warmth of the Vietnamese people and their willingness to put a very difficult period for both the United States and Vietnam behind them.

Mr. Bush’s national security adviser, Stephen J. Hadley, bragging to the New York Times whilst conceding he had not had any direct contact with ordinary Vietnamese on his whirlwind visit for this weekend's big summit of Asia-Pacific leaders in Hanoi. 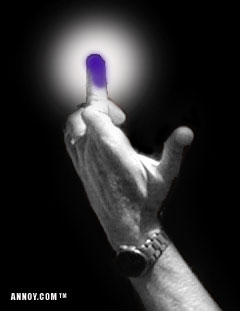 The problem with living in a bubble is that you miss the most basic of signs. Grimaces are mistaken for smiles and birdie-flipping is mistaken for waving.

Given the President's penchant for traveling (he had only been on one trip outside the United States before becoming President) the only thing he really knows about Vietnam aside from the increasingly similar parallels to his war in Iraq is how to avoid it. And his speeding motorcade and whopping 15 minute visit to the Joint P.O.W./M.I.A. Accounting Command couldn't better reflect it.

On August 29, 2006 the local Hanoi city paper, Labor, reported that two ducks were found to be infected with the bird flu virus. While there hasn't been a new major outbreak, Vietnam is appropriately weary.

So it's unlikely that the visiting lame duck will be eating any on this trip, as he clucks around the conference, fastidiously avoiding contact with South Korea's Roh Moo Hyun, who, to the anger of the Bushies appears to have taken a softer line on North Korea, and who in turn holds the Bushies accountable for their Northern neighbors going nuclear.

Back at home, the President's sinking popularity forced him to bring back Daddy's friends to help him get out of his Iraqi quagmire. The over-arching message of the recent elections, despite already going unheeded by the administration, showed the world where America really stood on the Iraq war. And unlike this President, global leaders read the news and understand public moods.

Against this backdrop, Bush's presence at APEC will be tinged with pity as global leaders posture against a sitting lame duck.

It’s a pity Daddy couldn’t help him get out of Vietnam once again.

Of all the excuses we’ve heard of late, even going back to Bill Clinton’s, "I never had sexual relations with that woman," nothing quite beats the latest excuse from Ted Haggard the president of the National Association of Evangelicals who appears to have a propensity for crystal meth-enhanced gay sex. This latest FOK (friend of Karl) finally sheds some light on how James Guckert aka Jeff Gannon got into the White House press room. 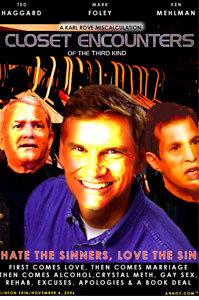 Haggard resigned on Thursday after a Denver escort named Mike Jones claimed to have had many drug-fueled trysts with Haggard – for cash. In an interview with MSNBC, Haggard, looking as haggard as his name, sheepishly claimed that he bought crystal meth from Jones, but didn’t use it (a kind of sniffing it without actually inhaling it variation) and threw it away, resisting the temptation that had led him to the gay hooker for "only a massage" to begin with.

Having tried crystal meth myself, (I’ll try anything once) I assure you, the only massage happening involved a penis and a prostate (with release).

From disgraced congressman, Mark Foley, to pathetic Ted Haggard (and the unfortunate Gayle Haggard), the biggest problem facing religious zealots and homophobes, is that their own worst enemy is one of their own creation. The closets they want gays to stay trapped in, are invariably the cause of their undoing. Healthy, self-expressed gays and lesbians won’t be brought down by revelations as to who they are if they’re honest to begin with. Hypocrites, adulterers, liars and cheats, on the other hand...

Harold Ford Jr., the never-having-served-in-the military, closet Republican (angling to be the Democratic Mark Foley, perhaps), was among the first of the Democrats to turn against Kerry, demanding that he apologize to the troops. So did, of course, Republican senator, John McCain, and the beleaguered, page-scandal tainted Speaker of the House, Dennis Hastert, who managed to wheeze a demand for an apology between bucketfuls of lard.

What about apologies for leaking the name of CIA operatives, sending the educated troops into an undefined, unwinnable quagmire, lying to the families of dead servicemembers, aiding and abetting the enemy by a misguided, preemptive attack that enabled Al Qaeda to morph into Medusa-like, decentralized, terrorist cell blocks that are more violent, bent on destruction, more difficult to penetrate and are making recruiting gains in direct contrast to the United States military who can only try and meet their recruiting goals by lowering the standards of education and ethics of its recruits?


John Kerry's unfortunate gaffe on Monday, where he suggested that a failure to work hard and get an education, was seized upon by desperate politicians from the Republican President to the sycophantic Democrat, Harold Ford, Jr., trailing in the Tennessee senate race.

First off, I'm not a big John Kerry fan. John Kerry, after giving a forceful response Tuesday, fucked it all up again on Wednesday by appearing on the Don Imus show, and scheduling an appearance on CNN with the pot-bellied, bellicose Wolf Blitzer.

Harold Ford, Jr., who relished the opportunity to engage the race card after the Republican National Committee gave him a fee pass by suggesting he fucks white women (rather than white men) is a frequent guest on the racist, homophobic Don Imus show, renowned for their nigger and faggot ridicule. (Ask Serena and Venus Williams, or Anderson Cooper). To that end, perhaps, more than anything else, Harold Ford, Jr. owes his self-hating facade an apology when he looks in the mirror, supposing he can stand to.

Missing in the fray, seized on by not just Fox News, but MSNBC, CNN, CBS, NBC, ABC and every other corporate owned media shill and shell, is the harsh, bitter reality, that the prosecution of the war in Iraq, the egregious, "Don't Ask, Don't Tell" policy, the extended tours of duty, the sinking morale and the Stop Loss policy preventing those who have completed their obligations from honorably leaving the military have resulted in dangerously low recruiting goals.

Servicemembers Legal Defense Network (SLDN), the national, non-profit legal services, watchdog and policy organization dedicated to ending discrimination against and harassment of military personnel affected by "Don't Ask, Don't Tell" and related forms of intolerance, estimates that by the end of 2005 it will have answered 900 calls for assistance made by military personnel. Of those, it intervened to save three dozen military careers in 2005.

Many of the professionals we're discharging are fluent in languages such as Farsi and Arabic, who are able to intercept communications, interpret messages and in essence, make sense of the intelligence that it so important it requires pissing on the constitution to acquire it. All the while, the Pentagon admits to a shortage in these fields, and is having the toughest time ever meeting recruitment goals in all branches of the service.

To meet recruiting quotas in all branches of the military, standards have been lowered to include felons and idiots. While the military can boast the best and the brightest (when they're not discharging them for being gay), their lowering of standards is apt to produce a new generation of uneducated idiots, who, yes, will end up in Iraq, if we continue along this path. More Abu Ghraibs to follow by those who are uneducated, don't know better, and are caught in a leadership vacuum.

Democrats. Engage in this strawman at your own peril.

Apologies indeed. Bush, Rumsfeld, Cheney. Don't trip over yourselves on your way to the podium, you hypocritical pigs.