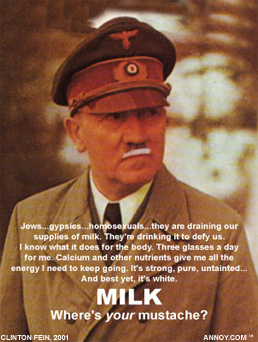 Like a doddering old delusional douche bag, Secreatry of Defense Donald Rumsfeld told the American Legion that critics of his war in Iraq were inept in their understanding of history and likened them to those who sought to appease Hitler. “With the growing lethality and the increasing availability of weapons, can we truly afford to believe that somehow, some way, vicious extremists can be appeased?,” he stated.

As if to underscore the theme, the other architect of the failure in Iraq, Dick Cheney, who, five years later, amidst mountains of evidence and a distinct rebuttal from the President himself, still sees Saddam Hussein’s ghost in the rubble of September 11th, contributed to the new attempt to liken their national and international failures to the glory of World War II victory.

“This is not an enemy that can be ignored, or negotiated with, or appeased…And every retreat by civilized nations is an invitation to further violence against us. Men who despise freedom will attack freedom in any part of the world, and so responsible nations have a duty to stay on the offensive, together, to remove this threat.”

No fuckface. Civilized and responsible men and women have a duty to mitigate the threat posed by terrorism in addition to dealing with the additional threat of lunatics sending people to war and killing thousands upon thousands of innocent people based on deliberately cooked intelligence and marketed and packaged with lies and deception. You, Mr. Cheney have neither the record nor the moral authority to even speak on the subject.

Mr. Rumsfeld’s assertion that critics of his bungling of the war in Iraq can be framed as fascist and compared to the appeasement of Hitler is almost as ludicrous as the suggestion that its consequences, unlike the efforts of the allies in World War II, and characterized by a violent and deadly sectarian war, can be referred to or is perceived as, liberation.

Fuck All that You Can Fuck…in the Army! 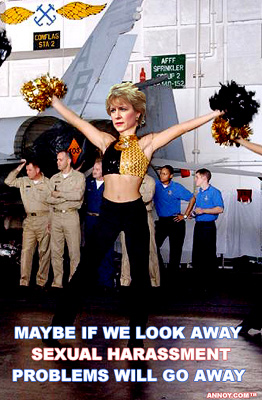 A six month investigation by the Associated Press found that over 80 military recruiters across all branches of the military were disciplined for misconduct with potential enlistees in 2005.

Under Rumsfeld’s watch. In 2002, Defense Secretary Rumsfeld disbanded the Defense Advisory Committee on Women in the Services (DACOWITS), the only entity that provided a modicum of oversight to the rampant sexual harassment in the military.

Aside from lowering the recruiting standards in both physicality and intelligence – a decision that has already begun to bear fruit given the rise of neo-Nazis and other self-styled militia that will produce and churn out gangs of Tim McVeighs – Rumsfeld’s miscalculation of every step in the Iraq war has left America’s military worse off than ever before, despite more than 1.5 billion allotted to recruiting efforts this year.

In essence, under Rumsfeld, we now have sick, over-stressed, under-paid assholes recruiting women leading to a situation where, according to Associated Press, “Women were raped on recruiting office couches, assaulted in government cars and groped en route to entrance exams.” The report also found that “at least 35 Army recruiters, 18 Marine Corps recruiters, 18 Navy recruiters and 12 Air Force recruiters were disciplined for sexual misconduct or other inappropriate behavior with potential enlistees in 2005.”

Like Cheney’s “last throes of the insurgency” predictions that precipitated an all-out sectarian war, you still have enablers like Defense Department spokeswoman Lt. Col. Ellen Krenke insisting that the Pentagon takes these things very seriously

Elaine Donnelly, President of the Center for Military Readiness, has her head so far up her dry cunt she can’t see the forest from the bush. She told Associated Press reporter Martha Mendoza "Let's face it, these guys are handsome in their uniform, they're mature, they give a lot of attention to these girls, and as recruiters they do a lot of the same things that guys do when they want to appeal to girls. There's a very fine line there, and it can be very hard to maintain a professional approach."

Perhaps Ms. Donnely has a difficult time keeping her panties on for anyone who might be handsome and pay attention to her, but for most sexually functional people, this is hardly an adjustment. It’s a social norm. It probably also explains why Ms. Donnely is such a vociferous opponent of openly gay servicemembers serving in the military. Guess who wouldn’t be able to contain herself in the showers?

With Rumsfeld killing DACOWITS, and people give credence to the likes of Donnely’s Center for Military Readiness, who don’t seem to mind the odd rape or five hundred, but would sooner boot out a gay servicemember who’s fluent in Arabic and helping to save the lives of his comrades on the ground in Iraq, what do we expect? It’s surprising they haven’t used an image of a very pregnant Lynndie England as a recruiting poster.

“Not only do you get to see the world, you get to torture it, and get laid!”

These are the people we are entrusting to enlist the best and the brightest, and we wonder why we end up with Abu Ghraib and Haditha. 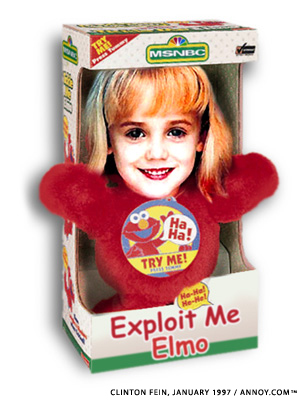 Almost ten years ago, as we prepared to launch Annoy.com, a young girl was found murdered in her family home in Boulder, Colorado on Christmas morning. By the time we were ready to go, filing our federal lawsuit on January 30, 1997, there wasn’t a person on the face of the earth who did not know who JonBenet Ramsey was.

In what would become our trademark, our first image that evoked shock, outrage and ultimately hate mail, depicted Jon Benet’s head on a “Tickle Me Elmo” doll, to accompany my editorial, The Gruesome Marketing of JonBenet.

On the heels of the OJ Simpson debacle, but prior to the death of Princess Diana, the frenzied media reaction to JonBenet’s murder was unprecedented.

Like an uncontrollable virus, the hoards cut and pasted every detail they could find. JonBenet specials, inside scoops, latest updates, interviews with friends, neighbors, maids, aunts, cousins….exclusive interviews, exclusive photos, exclusive obituary. The almost comical, but depressing accusations by tabloids of tabloids. Web sites, parasitic, sprung up like warts, feeding on one another and perpetuating each other's relevance... beauty queen JonBenet, not really child, not really real, not really everyday… and we the gullible and the beguiled bought it hook, line and sinker, while our six year old daughters still wonder why it's okay to murder and rape those less fortunate…perhaps black, perhaps poor, perhaps ugly.

Nothing, however, matched the endless, breathless, round-the-clock exploitation of the news media, churning out books and spawning careers in the punditry of misery. As Jane Pauley inadvertently summed it up in an interview with Lawrence Schiller, author of a book on the JonBenet Ramsey case, on NBC's Dateline, “It’s like you had a hundred different facts in a party game.” And, from Dan Abrams to Larry King and back, play they did.

Mrs. Ramsey died in June 2006 of ovarian cancer, never quite vindicated in the eyes of the public. With the arrest of John Mark Karr in Bangkok, America can prepare for the next onslaught to distract from the civil war in Iraq and tenuous ceasefire in Lebanon.

John Ramsey is unlikely to forget who his friends are, and hopefully will keep the media at bay, as they prepare to dig up, piss on and shred JonBenet’s memory once again. And hopefully he won’t succumb to the too-little-too-late, inevitable, post-mortem re-varnishing of Patsy Ramsey’s memory either.

Alas, for the Ramsey family, resting in peace does not seem like an option.

MSNBC - More Shit Nothing But Crap

The desperation at MSNBC is excruciating.

From annoying “MSNBC Reports,” endless “investigative reporting” by John Seigenthaler of prison inmates and security procedures and the newly branded, much touted “doc blocks” , and other crappy stories about husbands killing their wives, seem to be the new focus, prodigiously breeding, of what was once a news channel. The names blur: Captured, The Iron Hand of Justice, The Stench of Journalistic Desperation.

And while it’s a relief not to have to listen to Rita Cosby wheeze the news of the day or breathlessly compete with Greta van Susteren (literally) over Natalie Holloway coverage, the only choice among Hickville's hellfire Nancy Grace; cunt dunk falafel adulterer, Bill O’Rielly; pudgy pansy, Tucker Carlson; or spit-spewing, high-pitched bitch, Chris Matthews, is suicide.

Joe Scarborough, the former Republican version of Gary Condit (dead interns lying around his office and stuff) who, like Geraldo, fights hurricanes ala Don Quixote, has now resorted to cussing and beeping to boost his ratings, unable to even compete with the osteoporotic, hunched-shouldered Larry King. Yep, the same Scarborough who nearly had a nervous breakdown over what to tell his young sons who saw Janet Jackson’s nipple (what did he tell them about the dead intern?) has no qualms telling them about assholes by behaving like one. Or acting like a big, fat, but unfortunately floppy, dick.

All of this follows the startling decision by the powers that be at NBC Universal to hire Dan Abrams, the little-boy-man, wet-behind-the-ears (and probably still a virgin until he finds the right guy or grows facial hair) to take over from MSNBC Chief, Rick Kaplan, the asshole that MSNBC hired (after CNN gave him the boot in 2000) and then fired in June.

The only thing consistent about MSNBC through all these depressingly obvious attempts to be something is that they still consider dried-up coke whore, Vicodin-popping, Howard Stern wannabe, Don Imus, a newsman. Brilliantly disguised as an Ann Richards lookalike grocery salesman, pawning salsa, coffee and old-man stink.

Oh that there was dedovshchina -- the abusive system used by the Russia military -- to discipline these fucking morons. Ease our pain by broadcasting theirs.