Who the Bloody Fucking Hell Are You?

Far be it from us to denounce vulgarity. But when hypocrisy slaps you hard enough in the face, a response is usually necessary. Australian Prime Minister, John Howard, defended a new advertising campaign, “Where the Hell Are You?” launched by Australian Tourism Minister Fran Bailey. Howard told reporters in Sydney:

"I think the style of the advertisement is anything but offensive but is in fact in context and I think it's a very effective ad."

What makes it so incredibly eye opening, is that this is the same blood-lusting Iraqi War Bush sycophant – an original “Coalition of the Willing” cheerleader, who complained to reporters last month about the decline of good manners in Australian society.

"I think we have seen a marked deterioration in good manners…I think it's time that the television networks put a curb on the increasing use of vulgarism on television."

We’re not sure if this is allowed in Australian society, but we have a polite question for Mr. Howard: Who the Bloody Fucking Hell Are You?

Black and White and Yellow All Over

American media’s response to how to cover the Danish cartoon furor has been eye opening. Aside from the Philadelphia Inquirer, the only major newspaper to run one of the images to date, (and a few smaller publications in California and Wyoming), most newspapers have chosen to tell the story without using the images.

The executive editor of the Washington Post Leonard Downie Jnr. said the cartoons "wouldn't meet our standards for what we publish in the paper … We have standards about language, religious sensitivity, racial sensitivity and general good taste."

No one can deny that the issue is complex, and that careful consideration of the cultural and religious ramifications is warranted.

In an update by Joe Strupp in Editor & Publisher, Anne Gordon, Philadelphia Inquirer managing editor, chided the Associated Press for independently withholding the cartoons claiming it was not AP’s decision to make on behalf of all newspapers.

Kathleen Carroll, executive editor at The Associated Press, asserted that any publication of the cartoons does not add to the news coverage of the issue. She added: "If people want to find them, they are easily found."

Doug Clifton, editor of The Plain Dealer in Cleveland, told Editor & Publisher that he did not “see a need to insert ourselves in that fight." But Clifton said his paper will likely place a link to the images from another site when it runs an editorial on the issue over the weekend. "They will have the option to see it if they choose," he told Editor & Publisher.

That is unquestionably the most cowardly and pathetic response I have seen to date. It’s one thing to state, albeit disingenuously, that publication of the images is not germane to the telling of the story, but its quite another to claim that as an excuse to mask a fear of reprisals or to capitulate to pressure.

What Doug Clifton is doing is riding on the backs of others who are taking significant risks in standing up for their principles and having the courage of their convictions.

Clifton’s yellow approach is the moral journalistic equivalent of jacking off during a gang rape.

Sticks and Stones Can Break Your Bones, But Cartoon Flaps Can Kill You 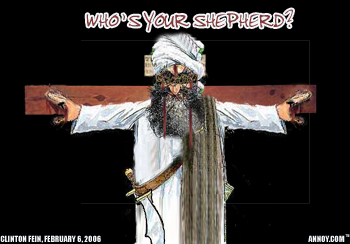 The global furor over the publication of cartoons depicting the prophet Muhammad as violent seems as inappropriate as the tepid condemnation over Pat Robertson’s call to assassinate Hugo Chavéz.

Calling for the beheading of an artist for creating a caricature depicting a religion as violent is about as hypocritical as assaulting or killing a woman for appearing in a degrading beauty contest. Or like amputating Ann Coulter’s legs for her immodest vagina flashing on Fox News. Or castrating and sodomizing men who rape.

As fanatical, intolerant Muslim clerics continue to incite violence over the depictions of violence, and as Israeli Jews deliberately incite riots by building unauthorized new structures in settlements, America’s religious righteous -- armed with justifications from their churches, mosques and synagogues -- are mincing into gay bars with machetes and guns and opening fire. Others are frantically preparing to picket Coretta Scott King’s funeral because she supported gay rights. The Pope, lost in the haze of his Nazi Youth is too busy purging the symptoms of his dysfunctional, homocentric Church -- in between satin dress fittings and Prada shopping sprees -- blissfully oblivious to the blatantly obvious causes. The one certain thing all of these Torah-touting, Koran-killing, Bible-bashing, Scripture-screeching religious zealots seem to share, is an unbridled lust for violence.

While all the world’s major religions -- Judaism, Christianity, Catholicism, and Hinduism – shoulder responsibility for fueling extremist factions spewing hatred, violence and intolerance, Muslims do need to drop the victimization act and realize that just as they condemn and judge others with impunity, so too must they learn to cope with being subject to criticism.

Until people stop, in Allah's name, stoning woman to death, killing homosexuals, cutting the hands off children stealing food to survive, flying passenger planes into skyscrapers, car-bombing innocent people, forcing their religious convictions onto others, and other such atrocities, and until Muslims loudly and clearly reject and condemn the violence perpetrated by those who have hijacked and perverted their religion, the likelihood of cartoonists depicting Muhammad as a gentle, olive-branch carrying dove is not particularly high.