The Fashion of the Christ 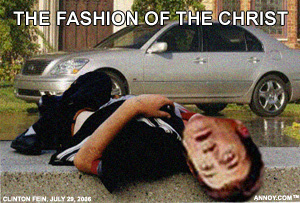 "A woman should be home with the children, building that home and making sure there's a secure family atmosphere."

So said actor Mel Gibson in 1991. As opposed to getting fucked up on alcohol and racing his 2006 Lexus LS 430 on the Pacific Coast Highway at 87 miles-per-hour in a 45-miles-per-hour zone.

When this hypocritical fuckwad was arrested, his blood alcohol level was 0.12 percent. Significantly over the legal limit. And about as Godly as Rick Salomon's cock being chafed and scraped by Paris Hilton's teeth.

Aside from endangering the lives of anyone else -- humans or pets -- on the roads in Malibu, this 50 year-old prick seems to be providing a real secure family atmosphere. The actor and director of, most recently, The Passion of the Christ, (the thinly-veiled anti-Semitic blockbuster that had Pope Benedict XVI creaming in his Satin vestments) preaches family values and brags about his spiritual superiority. And no doubt believes gays would wreck the sanctity of the institution of marriage.

Yeah right. This piece of shit loves his wife and family so much that he would risk wrecking his mariage and destroying their lives, and is so spiritually evolved he thought the blood of Jesus could be sucked out of a bottle of Grey Goose.

Like Rev. Michael Jude Fay, the priest who resigned from the affluent St. John Roman Catholic Church in Connecticut, and is accused of having misspent upwards of 1.4 million in parishioner donations to fund his hotels, jewelry, Italian clothing and a Florida fucknest which he shared with “good friend” Cliff Fantini, these men of God are too busy eating ass, downing vodka and sucking cock to recognize their flagrant hypocrisy.

This story is still fresh, but Gibson will find a way to weasel his way out of it. Maybe the money-grabbing bastard who poured him his tenth glass to drown his spiritually evolved happiness was Jewish.

UPDATE - Yep, I was right about the anti-Semitic tirade. Seems like Gibson's true colors were revealed in his repsonse to the arresting officer, published by TMZ. Apparently, the drunk who claims to "own Malibu," screamed: ""You motherfucker. I'm going to fuck you," before moving on to, "Fucking Jews... The Jews are responsible for all the wars in the world. Are you a Jew?" (see unredacted statement).

Despite the The L.A. County Sheriff's Department's attempt to cover up the original 8 page report, details of Gibson's drunken anti Semitic tirade were leaked to the media (although clearly none of the outlets on Yahoo News! who were a day late and a dollar short with this story. Thankfully there's TMZ.)

Apologizing for his "despicable" statements to deputies, and claiming to have said things he did "not believe to be true," Gibson issued a long-winded screed through his publicist, Alan Nierob, who sure as hell has his work cut out for him. Among the gems, "I acted like a person completely out of control when I was arrested...I disgraced myself and my family with my behavior and for that I am truly sorry. I have battled with the disease of alcoholism for all of my adult life and profoundly regret my horrific relapse." You didn't act like a person out of control, cocksucker, you were a person out of control. 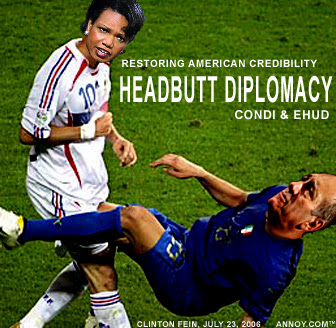 Nothing captured the world's attention quite like the World Cup which culminated in a dramatic clash between Italy and France in which French captain, the gifted Zinedine Zidane, better known as Zizou by those in the know, head-butted Italy's white trash, trouble maker, Marco Materazzi, in the chest after he called Zizou "the son of a terrorist whore" according to published reports, albeit speculative.

As the realities of an Israeli incursion into Lebanon threaten to ignite the already volatile Middle East, the nationalism inspired by World Cup fervor suggests that in sports, like diplomacy, there is only one thing that counts. Winning.

The United States' embarrassing 2-1 loss to Ghana in the first round demonstrated, perhaps metaphorically, how little influence the United States seems to wield these days, and the irony of France making it to the finals could not have been lost on hawks and doves alike, especially the macho, beef-chomping, Bud-swigging chumps who see the French as cowardly, foie gras-nibbling, Champaign-sipping appeasers.

Listening to White House Press Secretary, Tony Snow, this morning was so excruciatingly painful it was like being hit over the head with a baseball bat. Beginning with an apology for being “froggy-throated,” he should have apologized for being foggy-minded. He wouldn’t characterize the war in the Middle East as war, but as hostilities.

In response to a question from NBC’s David Gregory, as to why this is not our war, Snow responded, “Why would it be our war? I mean, it's not on our territory. This is a war in which the United States -- it's not even a war. What you have are hostilities, at this point, between Israel and Hezbollah. I would not characterize it as a war.”

Given that logic, the non-war in Iraq isn’t really ours, since it’s not our territory either.

When asked to talk about the level of support Iran is giving Hezbollah in this current crisis, Snow claimed that even if he knew, he wouldn’t tell, since talking about specifics would get into the disclosure of intelligence, which is a fair enough answer, but rather than stopping there, he added, “Good for me, I don't know, so I don't have to worry about faking it.”

This is the problem with hiring a Fox News reporter as White House Press Secretary. At Fox News, faking the news under the guise of “fair and balanced” is a not only a modus operandi, it’s a marketing campaign. The real world, however, expects the White House to tell the truth. Faking the intelligence about Iraq’s weapons of mass destruction is responsible for thousands upon thousands of deaths, and diminished credibility and leverage to deal with the current crisis in the Middle East.

Someone needs to remind this jackass that faking information has far more dangerous and wide-reaching consequences than covering up Bill O’Reilly’s propensity to fantasize over the phone with employees about fucking them with falafels.

George W, Bush’s arrogance is superseded only by his ignorance. His lack of curiosity is not simply embarrassing to Americans the world over, but critically dangerous.

Yes, President Fuckface was caught on video, mouth full of dinner roll, telling British Prime Minister, Tony Blair, to tell Kofi Anan to get Hezbollah to “stop this shit,” and indeed one can only shudder at the thought of the manners this culture maven might display at a tea with the Queen at Buckingham Palace, but far worse is his inability to recognize how ineffective marketing campaigns disguised as policies play overseas.