There's Something About Sarah 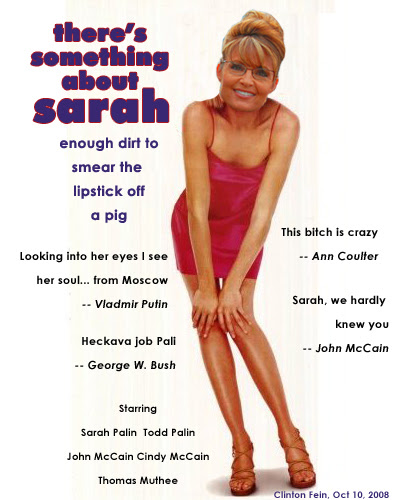 It’s not the freakish, shrill non-answers she gives in the
few not-quite interviews by not even close to journalists. It’s not the hard
core fundamentalism, sugar-coated to create an illusion that she supported her
unmarried teenage daughter’s “choice” to carry her fetus to term, when she
would have insisted on it regardless -- even if the father was her husband, who
had raped her. After making her pay for the sex assault kit. And firing anyone
who sought funding to cover the costs for said rape kits.

It’s not her inability to avoid sounding like a
malfunctioning former beauty pageant contestant robot when responding to
questions about serious topics around foreign policy experience -- by
regurgitating talking points about mavericks. Like Senator McCain is a
maverick, Charlie, and like world peace, like, such as.

It’s not her strong affinity to pastor Thomas Muthee and the
Assembly of God Church, parading their tragically comical “former gays’” for whom
all powerful God, apparently in between warding off evil, car accident-causing

It’s not her Greta Van Susteren moistening[1] husband, the “First Dude” of
Alaska, Todd, wrecking the Tundra while the underage kids binge drink and snort
Oxycontin, nor the precision with which she was able to strong-arm the supposed
father of her child’s child, a self-described child-averse redneck, from a
carefree hockey playing teenager into a brooding, neutered mute destined to
loathe and resent and blame Bristol for the rest of his life for her mother’s
commitment to someone else’s at the expense of his.

It’s not the over-amped, Aderall fueled, slightly manic data
dump that all but immersed debate moderator Gwen Ifill, who McCain suggested
had racist intentions based on her writing of a book about Obama, perhaps in an
unsuccessful attempt to distract those of us who remember his buddy, Don Imus,
referring to Ifill as a “cleaning lady.” McCain would make sure Sarah wasn’t
intimidated by any nappy-headed hos[2].
Anymore than he would refer to his wife, Cindy, as a

It’s this freak of nature. The anti-Christina of Feminism.
This aw shucks automaton that will earn Tina Fey an Emmy, and elevate
the ratings of Rachel Maddow on MSNBC, gives me the chills in ways I don’t
quite understand. The notion that after nearly eight years of George w. Bush,
America still believes that they’d rather have a President who they could knock
back a beer with than one who might be able to string together a coherent
sentence. The Tits on the Ticket personification of America’s racist undertone, allowing the narrowest of minds the perfect conduit to get away
with voting for the bitch rather than the nigger and still look progressive.

Sarah Palin has managed to undo years of feminist progress, despite
intelligent arguments to the contrary by the likes of Camille Paglia. Whether
it’s the Black movement, the Women’s movement or the Gay Movement, the ultimate
mark of progress is demonstrated by a new generation at liberty to simply
accept and demand the rights and freedoms they deserve without any appreciation
of the blood, sweat and tears sacrifices made by the activists that came before
them. Sarah Palin could pursue her ambitions – from pipe playing beauty pageant
contestant to Alaska governor – unapologetically without playing the victim
card. Good for her. But make no mistake, Sarah Palin is no Hillary Clinton, Benazir Bhutto or Winnie Mandela.

Her interviews with Katie Couric of CBS News set the bar for
the one and only Vice Presidential debate so extraordinarily low that the fact
that she didn’t sound like a lobotomized drunk was enough for Pat Buchannan to
declare that conservatives across the country were heaving a collective sigh of
relief, and the rest of America to declare her performance a success. But, as
Maureen Dowd pointed out, “she dangles gerunds, mangles prepositions, randomly
exiles nouns and verbs and also — ‘also’ is her favorite vamping word — uses
verbs better left as nouns, as in, ‘If Americans so bless us and privilege us
with the opportunity of serving them,’ or how she tried to ‘progress the
agenda.’”

As we head into the final stretch, Sarah Palin has
transformed into an attack dog, zoning in on Obama’s supposed ties to 60s
radical William Ayers. “Our opponent ... is someone who sees America, it seems, as being so imperfect, imperfect enough, that he's palling around with terrorists
who would target their own country," Palin told a group of donors in Englewood, Colorado. "This is not a man who sees America like you and I see America. We see America as a force of good in this world. We see an America of exceptionalism."

A strange strategy, given Palin’s own dubious ties with the
likes of pastor Thomas Muthee, or her links to an Alaskan group that wanted Alaska to secede from the United States.

In response to her less than adequate performances,
particularly with her Katie Couric interviews, Palin stated: “The Sarah Palin
in those interviews was a little bit annoyed. It's like, man, no matter what
you say, you are going to get clobbered. If you choose to answer a question,
you are going to get clobbered on the answer. If you choose to try to pivot and
go to another subject that you believe that Americans want to hear about, you
get clobbered for that too."

In the days leading up to the election, we are not going to
learn anything more from Sarah Palin. She will continue to regurgitate talking
points that contradict others she has made – less government, but more
oversight, a fresh, energetic start that excludes an old Washington insider
like Joe Biden, but not John McCain, Obama’s inexperience compared to her
ability to see Russia from Alaska – and it’s the best we can expect from her.

Say it ain’t so, Sarah! There you go spewing talking points again
like a senile Arizonian senator... Now, doggone it, let’s answer just one
fucking question and tell Americans who and what the hell you are. You mention
this imaginary media filter, and I’m glad you did. They are a pathetic bunch.
But with your genuine belief in evil witches and the Flintstones, a little
clarity from you is not asking too much now, is it? God help us. Our reward for
your ascendancy is in hell, right?”

My only fear, and this is why Sarah Palin gives me the
chills, is that for America, this inadequacy masked as mediocrity may just be
good enough.