Evil and inhman Muslims!!! What about Faggots and Jews?

Popina Benedict XVI is finding herself in hot water, and this time it’s not because of her red Prada slippers.

Nope. The satin and silk clad “former” Nazi, women-hating, fag-bashing hypocritical pussy-wannabe has angered a few billion Muslims by quoting from texts recounting a conversation between a Persian and 14th century Byzantine Christian Emperor Manuel Paleologos II who characterized some of the teachings of the Prophet Mohammed, Islam's founder, as ''evil and inhuman.''

That the Pope would quote medieval texts to support his medieval positions is about as surprising as another trip to the hospital by Lindsay Lohan. The bullshit being spun as an apology is about as authentic and credible as Senator George Allen’s apology for calling a member of Democratic challenger, James Webb, “macacca”. (He meant malakas, or perhaps malakia, ironic coming from such a hypocritical wanker).

In a speech on Sunday, Popina’s excuse for her outburst was that her words ''were in fact a quotation from a medieval text which do not in any way express my personal thought.''

Much like her quoting passages of Mein Kampf would reflect her “personal thoughts,” just her convictions.

Just say sorry for being a fucking asshole dipshit, and the quicker everyone can move on. 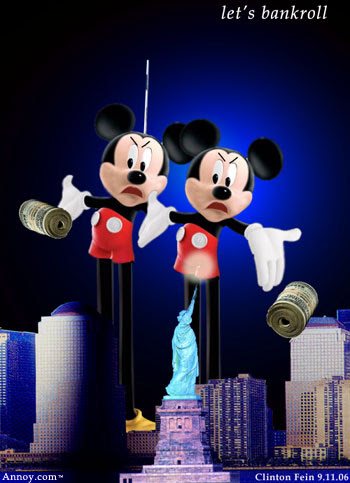 (With apologies to David Bowie)


Pushing through the gaping hole, so many workers choking

Time enough to wipe the tears, and to even give up smoking

Offer up their platitudes, a paltry little token

We heard horror and glory, glamorized on TV

We heard lies and excuses and we watched ABC

Our cynicism stretched so taut, no sweet sentiment this season

No action, nor reaction, no rhyme and no reason

The consumption enablers selling anything that goes

As they milk fading tragedies to stuff up their nose

And rape our confusion to cover the blows.

Given greed masked as kindness, we humanitarian species

Returning home in their coffins as the blood keeps on spilling

I found myself trapped in a mindless haze, lost in fantasy, fact and fiction

Wasted on promises, gorging lies by the package...my insatiable addictions.

There was fake all around and I groped for compassion

There was none, it was gone, like the towers once crashing

The taste, the waste, the inevitable so soon

The bitterest of products to the ugliest tune.

It’s been five years, nothing has changed

It’s been five years, so much damage has been done

Five years, and yet nobody’s won.

It’s been five years, so boldfaced we lied

It’s been five years, now the world wants to trade

Five years, now there’s money to be made.

It’s been five years, this will never end