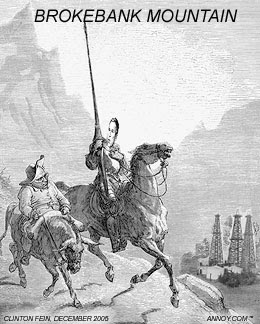 Set against the backdrop of an impossibly breathtaking Wyoming, Brokeback Mountain, Ang Lee’s movie based on the E. Annie Proulx short story about two cowboys, Ennis Del Mar and Jack Twist, (played by Heath Ledger and Jake Gyllenhaal respectively) who share a forbidden, passionate and enduring relationship that transcends the inevitability of their circumstances. What makes this movie a cultural milestone is that the homosexuality of these men is so low key that it’s difficult to determine whether their rugged masculinity serves as an extension of their deep-rooted repression or its perfect foil.

President Bush, who has attempted to model a populist image by clearing brush on his ranch, donning Air Force drag with a strategically fashioned bulge accentuation, pandered to his religious base by calling for a constitutional amendment to ban gay marriage that would irrevocably deny the kind of relationship yearned for by Del Mar and Twist.

From a man who avoided combat and was MIA for much of his brief National Guard stint, who has been captured primping and preening with make-up prior to a televised speech, who can’t seem to ride a bicycle or eat a pretzel without hurting himself, and is surrounded by gossipy aides the contradictions are startling. The most anti of the anti gay crowd – the Lou Sheldon, Gary Bauer, James Dobson, Pat Robertson types – appear like shrieking, hysterical variations of Tammy Faye Baker, while denouncing men who actually herd livestock or fly bombers. 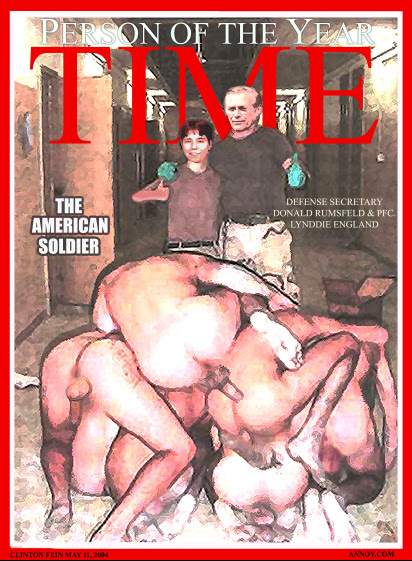 The commander of American-run prisons in Iraq says the military will not turn over any detainees or detention centers to Iraqi jailers until American officials are satisfied that the Iraqis are meeting United States standards for the care and custody of detainees.

"Bottom line, we will not pass on facilities or detainees until they meet the standards we define and that we are using today," the commander, Maj. Gen. John D. Gardner of the Army, said this week from Iraq.

In related news, the United States has hired Michael Jackson to head Child Welfare at the Health and Human Services Department, and is in talks to hire Ann Coulter to replace Karen Hughes to improve America's image in the Middle East.